He was a great story writer, who could always make the most trivial things, hilarious. As you can see here in Douglas Adams' depiction of Australia

Australia is a very confusing place, taking up a large amount of the Bottom half of the planet. It is recognisable from orbit because of many unusual features, including what at first looks like an enormous bite taken out of its southern edge; a wall of sheer cliffs which plunge deep into the girting sea. Geologists assure us that this is simply an accident of geomorphology and plate tectonics, but they still call it the "Great Australian Bight" proving that not only are they covering up a more frightening theory, but they can't spell either.

The first of the confusing things about Australia is the status of the place. Where other land masses and sovereign lands are classified as either continent, island, or country, Australia is considered all three.
Typically, it is unique in this.
The second confusing thing about Australia are the animals. They can be divided into three categories: Poisonous, Odd, and Sheep.
It is true that of the 10 most poisonous arachnids on the planet, Australia has 9 of them. Actually, it would be more accurate to say that of the 9 most poisonous arachnids, Australia has all of them. However, there are curiously few snakes, possibly because the spiders have killed them all. But even the spiders won't go near the sea.
Any visitors should be careful to check inside boots (before putting them on), under toilet seats (before sitting down) and generally everywhere else. A stick is very useful for this task.
Strangely, it tends to be the second class of animals (the Odd) that are more dangerous. The creature that kills the most people each year is the common Wombat. It is nearly as ridiculous as its name, and spends its life digging holes in the ground, in which it hides. During the night it comes out to eat worms and grubs.
The wombat kills people in two ways: First, the animal is indestructible. Digging holes in the hard Australian clay builds muscles that outclass Olympic weight lifters. At night, they often wander the roads. Semi-trailers (Road Trains) have hit them at high speed, with all 9 wheels on one side, and this merely makes them very annoyed. They express this by snorting, glaring, and walking away. Alas, to smaller cars, the wombat becomes a symmetrical launching pad, with results that can be imagined, but not adequately described.
The second way the wombat kills people relates to its burrowing behaviour. If a person happens to put their hand down a Wombat hole, the Wombat will feel the disturbance and think "Ho! My hole is collapsing!" at which it will brace its muscled legs and push up against the roof of its burrow with incredible force, to prevent its collapse. Any unfortunate hand will be crushed, and attempts to withdraw will cause the Wombat to simply bear down harder. The unfortunate will then bleed to death through their crushed hand as the wombat prevents him from seeking assistance. This is considered the third most embarrassing known way to die, and Australians don't talk about it much.
At this point, we would like to mention the Platypus, estranged relative of the mammal, which has a duck-bill, otter's tail, webbed feet, lays eggs, detects its aquatic prey in the same way as the electric eel, and has venomous barbs attached to its hind legs, thus combining all 'typical' Australian attributes into a single improbable creature.

The last confusing thing about Australia is the inhabitants. First, a short history: Some time around 40,000 years ago, some people arrived in boats from the north. They ate all the available food, and lot of them died. The ones that survived learned respect for the balance of nature, man's proper place in the scheme of things, and spiders. They settled in, and spent a lot of the intervening time making up strange stories. Then, around 200 years ago, Europeans arrived in boats from the north. More accurately, European convicts were sent, with a few deranged and stupid people in charge. They tried to plant their crops in Autumn (failing to take account of the reversal of the seasons when moving from the top half of the planet to the bottom), ate all their food, and a lot of them died.
About then the sheep arrived, and have been treasured ever since. It is interesting to note here that the Europeans always consider themselves vastly superior to any other race they encounter, since they can lie, cheat, steal, and litigate (marks of a civilised culture they say) - whereas all the Aboriginals can do is happily survive being left in the middle of a vast red-hot desert, equipped with a stick. Eventually, the new lot of people stopped being Europeans on Extended Holiday and became Australians.
The changes are subtle, but deep, caused by the mind-stretching expanses of nothingness and eerie quiet, where a person can sit perfectly still and look deep inside themselves to the core of their essence, their reasons for being, and the necessity of checking inside your boots every morning for fatal surprises. They also picked up the most finely tuned sense of irony in the world, and the Aboriginal gift for making up stories.
Be warned. There is also the matter of the beaches. Australian beaches are simply the nicest and best in the entire world. Although anyone actually venturing into the sea will have to contend with sharks, stinging jellyfish, stonefish (a fish which sits on the bottom of the sea, pretends to be a rock, and has venomous barbs sticking out of its back that will kill just from the pain) and surfboarders. However, watching a beach sunset is worth the risk.

As a result of all this hardship, dirt, thirst, and wombats, you would expect Australians to be a dour lot. Instead, they are genial, jolly, cheerful, and always willing to share a kind word with a stranger, unless they are an American.
Faced with insurmountable odds and impossible problems, they smile disarmingly and look for a stick. Major engineering feats have been performed with sheets of corrugated iron, string, and mud.
Alone of all the races on earth, they seem to be free from the 'Grass is Greener on the other side of the fence' syndrome, and roundly proclaim that Australia is, in fact, the other side of that fence. They call the land "Oz", "Godzone" (a verbal contraction of "God's Own Country") and "Best bloody place on earth, bar none, strewth." The irritating thing about this is they may be right.
There are some traps for the unsuspecting traveller, though. Do not under any circumstances suggest that the beer is imperfect, unless you are comparing it to another kind of Australian beer. Do not wear a Hawaiian shirt. Religion and Politics are safe topics of conversation (Australians don't care too much about either) but Sport is a minefield. The only correct answer to "So, howdya' like our country, eh?" is "Best {insert your own regional swear word here} country in the world!".
It is very likely that, on arriving, some cheerful Australians will 'adopt' you on your first night, and take you to a pub where Australian Beer is served. Despite the obvious danger, do not refuse. It is a form of initiation rite. You will wake up late the next day with an astonishing hangover, a foul-taste in your mouth, and wearing strange clothes. Your hosts will usually make sure you get home, and waive off any legal difficulties with "It's his first time in Australia, so we took him to the pub.", to which the policeman will sagely nod and close his notebook.
Be sure to tell the story of these events to every other Australia, you encounter, adding new embellishments at every stage, and noting how strong the beer was. Thus you will be accepted into this unique culture.
Most Australians are now urban dwellers, having discovered the primary use of electricity, which is air-conditioning and refrigerators.

Typical Australian sayings:
* "G'Day!"
* "It's better than a poke in the eye with a sharp stick."
* "She'll be right."
* "And down from Kosciusko, where the pine clad ridges raise their torn and rugged battlements on high, where the air is clear as crystal, and the white stars fairly blaze at midnight in the cold and frosty sky.
And where, around the overflow, the reed beds sweep and sway to the breezes, and the rolling plains are wide. The Man from Snowy River is a household word today, and the stockmen tell the story of his ride."

Tips to Surviving Australia:
* Don't ever put your hand down a hole for any reason whatsoever. We mean it.
* The beer is stronger than you think, regardless of how strong you think it is.
* Always carry a stick.
* Air-conditioning.
* Do not attempt to use Australian slang, unless you are a trained linguist and good in a fist fight.
* Thick socks.
* Take good maps. Stopping to ask directions only works when there are people nearby.
* If you leave the urban areas, carry several litres of water with you at all times, or you will die.
* Even in the most embellished stories told by Australians, there is always a core of truth that it is unwise to ignore.

See Also: "Deserts: How to die in them", "The Stick: Second most useful thing ever" and "Poisonous and Venomous arachnids, insects, animals, trees, shrubs, fish and sheep of Australia, volumes 1-42"

Douglas Adams was the writer of Hitch Hikers Guide to the Galaxy. He died of a Heart attack in May 2001 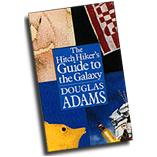